The war between India’s leading examples of non-thyroid or senility driven maniac behavior, Republic TV’s Arnab Goswami, and India Today’s Rajdeep Sardesai escalated recently. The two got into a major struggle over a maid on Monday, leading to an exchange of less than pleasant words on both sides.

The chain of events was triggered when Arnab’s old maid Aluminum Devi quit (wanted to pursue better opportunities outside Arnab’s domestic terminal). Her replacement was hired after Arnab hired an international talent search agency who, after due diligence, selected a suitable candidate who had a problem with her hearing abilities. This made her an ideal candidate as she had to put up with Arnab’s voice modulation sessions, which used to go on for nearly 7 hours at a stretch sometimes. During these sessions, he used to scream, shout, howl, threaten, and behave like Greta Thunberg’s vocal uncle.

When Rajdeep learned of his rival hiring a new maid, he thought of doing the same as well since his maid had also joined a big four accounting organization that has been selected as the advisor for the BPCL sell-off drive. Things were going smoothly so far. But events took a turn for the worse when Arnab began bragging about his new maid to his neighbors and over his news channel.
“Citizens and aliens. Friends and foes. Living beings and inanimate protoplasmic animations, your own anchor, your friendly neighborhood powder man, I the great Arnab have employed a new maid. In this era of a slight economic pinch, I the one and only champion and voice of the vocally depressed have attained this new milestone in my life,” said Arnab over his nightly news capsule Dusk Decibels with Arnab.

A jealous Rajdeep swung into action and reached out to local maid recruiter, bandage-free mummy, and the world’s largest consumer of liquid Botox products Simi Garewal. Simi helped Rajdeep reach out to the new incumbent and got her to delay her joining date at the Arnab household. When Arnab, through his sources, came to know of this, he moved quickly and picked up the new incumbent from her house and dropped her at the Taj Hotel in Colaba at 4 am in the morning.

This move caught Rajdeep by surprise. Crying foul, he approached the Maid Regulatory Authority of India (MRAI) with a complaint running into 980 pages. He alleged that Arnab had prevented the maid from joining his household and was detaining her illegally. Arnab meanwhile held a press conference at the hotel and presented the maid who claimed that she had voluntarily joined team Arnab.

Rajdeep meanwhile turned up at the presser unannounced and started heckling Arnab. Since Rajdeep, in a hurry, had forgotten to put on white paint on his hair, was unrecognizable, people were not able to place him when he arrived. But as and when the heckling started, Arnab asked Rajdeep to turn his volume down and speak to the camera and talk in ‘print’ language rather than gestures. Rajdeep, in turn, called Arnab, a goat that has moved on to greener pastures while forgetting the underlying ethos of paid journalism.

Arnab then glanced at Rajdeep and alleged that he was having an affair with an ex NDTV colleague and that Rajdeep was indulging in all this drama to blackmail him into preventing Arnab from exposing that affair in public. “Isn’t it true, Mr. Rajdeep, that you have traveled to various countries recently to meet this new lady in your life? Isn't it true that you asked Shashi (Tharoor) to give you lessons in hiding your liaisons? Isn’t it…” before Arnab could finish this sentence, Rajdeep rushed to the podium and started thulping Arnab.

In just a matter of minutes, Arnab’s glasses, his pen, and his grocery list were seen flying in the air. Rajdeep dragged him down and smashed a chair on his back, and Arnab collapsed, muttering “the nation needs to…”.

Rajdeep then walked away from the venue while an ambulance rushed Arnab to a bed reserved for him in the local Peelavathi hospital. “I could have thrashed him with my index finger. But since I am a follower of Gandhiji and believe in Ahimsa and peaceful co-existence, I didn’t raise a finger while I was being turned into instant noodles,” Arnab said in a press note read out by his wife Pipi Goswami. Mrs. Arnab Goswami claimed that only she had the right to thrash Arnab, and anyone doing so was doing it illegally, and she will ask the NIA and CBI to launch a probe into the whole incident.
Rajdeep was not available for a comment as he was offline on Skype since Wednesday. 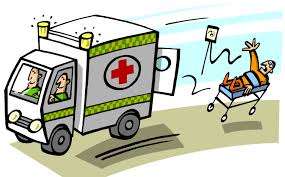