Still, claim to know Arnab Manoranjan Goswami? Well here are some new facts about the selectively patriotic anchor. You have seen them first here.

• Arnab once grilled his third standard English teacher for 3 hours to force her to confess that she didn’t know why ‘K’ is silent in a knife. “This is part of a deep-seated conspiracy to undermine the very foundations of learning. A conspiracy that runs across the corridors of powers that be and ends at the edge of our universe,” Arnab told his teacher. The lady fainted and quit teaching. It is said that she hasn’t recovered from her trauma yet.

• During his element and compound analysis practical classes in high school, Arnab kept a chunk of solid sodium on his tongue once. The chunk dissolved and vaporized. His tongue was not affected a wee bit.

• Arnab was punished many times by his school for tampering the amplifier in the school auditorium during debates. Arnab used to just head across to the backstage and minimize the volume of the microphone of his opponent to prevent him or her from making a point.

• Arnab improvised on the classic ‘mere pass maa hain’ scene from the movie Deewar. Arnab added 319 questions to the one’s that Amitabh’s character asks his brother. He even mailed the questions to Yash Chopra asking him to edit the movie and add those lines. Yash Chopra is said to have lost a huge volume of hair on his head after reading the questions.

• Arnab once got a State Bank of India employee to work during his actual lunch hour. He just asked the Assistant Manager over 70 questions in under 3 minutes about his lunch, his family and his upbringing. The employee sought a voluntary transfer to a remote branch in Tawang in Arunachal Pradesh. Arnab tried to visit him recently. In desperation to avoid an unruly encounter with Arnab, the employee ran across the India-Tibet border and was abducted by PLA goons.

• Arnab inherited his questioning skills from his great grandfather Prachin Goswami who according to some sources chased the last Mughal emperor Bahadur Shah Zafar away from Delhi by asking him a few ‘routine questions on administration’. Zafar went as far away as Burma to avoid Prachin

• During his college days, Arnab fell in love with an exchange student from Madrid. Arnab used to walk across to her hostel and hand over 170 questions every single day

• Once as a kid, he threw a tantrum asking his parents to get him a pug. "Pug do, pug do, mujhe pug do" he said while refusing to eat food. He threw a similar tantrum recently on TV over the Bollywood drug scam. 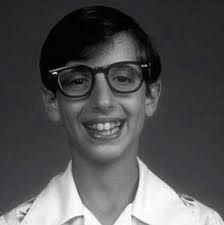 Arnab Goswami during his college days